For high-end student rooms at a prestigious central London address, 140 all-in-one compact kitchens from Elfin Kitchens have been bespoke specified and installed as part of a new £12 million development, which also involved the preservation of the historic Curtis Green-designed original façade.

iQ Bloomsbury, as the development is now known, originally called Bentley House, is owned by The Wellcome Trust and managed by iQ Student Accommodation.

tp bennett Interior Designer Nicola Paul explains why Elfin’s kitchens were specified for this project: “The white and stainless steel finish of the Elfin kitchens suited perfectly the industrial interior design scheme, which features a grey colour palette interspersed with metallic finishes. They also offered the high specification finish we were seeking for the development.

“With space at a premium, being able to provide cooking, cooling and storage facilities, in a sleek modular kitchen unit is a huge advantage. From a CAD design perspective too, the ‘drop-in, plug-in’ format of these kitchens eases the design, specification and scheduling processes considerably.”

iQ Student Accommodation markets the rooms using a bronze to platinum tiered format according to size and specification, ranging from studios and en suite bedrooms to two bedroom flats.

Tailored to the requirements of this development

tp bennett, who has partnered with Elfin on four previous large-scale student accommodation developments, worked with the project team to adapt the standard prototype to suit the construction, design and varying specification requirements for this project exactly.

Manufactured from hardwearing, powder-coated steel, the kitchens have been configured to incorporate branded appliances such as an Elica cooker hood, Zanussi oven and Gorenje induction hob, Liebher A-rated fridge freezer, with the high specification package also including a Bomann dishwasher.

Also specific to this development, a switchboard for the lights has been integrated into the top cupboard to assist with the hotel-style occupancy sensors; designed to reduce energy consumption. Other adaptations include a slightly smaller sink to increase counter space and the position of handles for ease of use.

For added safety, a patented fire suppression system has been incorporated under the cooker hood, which activates and releases across the protected area – a must for high occupancy student developments like this. 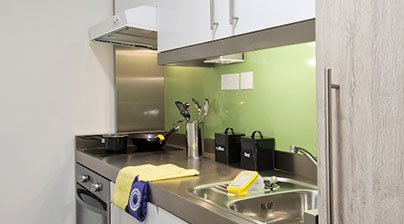 Enhancing the overall kitchen design, Elfin has colour-matched the one panel, fibreboard splashbacks, powder coating, with a gloss finish, to four striking colours as specified by tp bennett’s interior designer using the RAL system. The colours selected tie in with the rooms’ noticeboards and depict the different levels: ultramarine blue for the bronze and silver rooms, an orange for gold including the accessible rooms, and green for platinum.

Commenting on the kitchens and Elfin’s commitment to the project, Rob Ingram Balfour Beatty Regional Construction Ltd. said, “Elfin’s customer service is excellent, over and above what you’d expect, nothing is too much trouble.”

Bentley House was constructed in 1937 to the designs of Curtis Green for the Cambridge University Press as a warehouse store and was acquired by the Wellcome Trust in 1983.

This website uses cookies to improve your experience. We'll assume you're ok with this, but you can opt-out if you wishAcceptRejectRead more